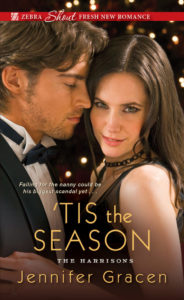 As the eldest son of the illustrious Harrison clan, Charles Harrison the III has always done the right thing. With his family’s legacy to uphold, he can’t afford a scandal, even if temptation is living right under his roof. His well-publicized divorce was a disgrace, so Charles is sure an affair with his bewitching nanny would bring his family even more infamy. And yet, he can’t resist the alluring Lisette . . .

With her usually reserved boss sending her heated looks, Lisette Gardner is in a bind. The nurturing nanny has always loved the eldest Harrison from a distance. But coming from a vastly different world, with a painful past that still haunts her, Lisette is determined to resist Charles’s advances. Because Lisette can accept nothing less than forever with Charles . . . and forever might be too much to hope for with the reigning prince of the Harrison clan.

“In the newest emotional and compelling romance from rising star Gracen, the oldest Harrison sibling gets his shot at love. Over the course of this series, Gracen has explored the dysfunctional family dynamics that have kept a distance between the siblings and their dictatorial father. The protagonists in this story have known each other for a couple of years, but a night of forbidden passion changes everything. Gracen’s skill and storytelling ability grows with each new tale.” —RT Book Reviews, 4 Stars

“Gracen’s third contemporary featuring the Harrison siblings (after Someone like You) is her best yet, the story of a straitlaced, high-profile businessman and the shy but charming nanny to his three kids. Unlike most of the Harrisons, eldest child Charles Harrison III has always toed the line, and after his well-publicized divorce, he’s not sure love is for him. Lisette Gardner, who’s overcoming her own painful history, has always been in love with her employer but is determined not to show it, thinking he couldn’t possibly reciprocate her feelings. At Charles’s surprise 40th birthday party, Charles realizes that his feelings for Lisette go far beyond the boundaries of employer/employee, and after a few post-party drinks, he makes a move. But their relationship may not survive the differences between their worlds, Charles’s snobby father, and Lisette’s insecurities. Gracen skillfully takes a common setup far past its usual limits to deliver a story that will tug hard at the heartstrings and make readers root for a happy ending. In particular, readers will fall in love with Lisette, whose anguish about aspects of her past rings all too real.” —Publishers Weekly

“Charles Harrison III knows he works too much, that he doesn’t spend enough time with his kids, and he fears that he’s turning into his cold, distant father. Lisette Gardner is wary, her past and personal life kept behind an impenetrable curtain of loneliness and responsibility. Their relationship is simple: she’s employed as his live-in nanny and doesn’t believe such a powerful man could ever fall for a girl like her. Then, one night, they give in to their secret passion. Assuming the worst, Lisette prepares to lose her job, but Charles insists that they take a shot at a real relationship. As their romance heats up, it quickly becomes apparent that transitioning from employer/employee to something more isn’t easy. With gossip and disapproval from Charles’s social circles and the emotional stress of change and insecurity, they’ll have to fight hard for their love.<br></br>

Verdict: Including several steamy scenes, this next series installment from Gracen (after More Than You Know and Someone Like You) is an appealing and passionate love story framed around themes of class conflict and family. Recommended for romance fans who believe love has no boundaries.” — Library Journal

“This third Harrison brother story was the epitome of the adage ‘third time’s a charm.’ Charles and Lisette are two people with understandable, believable conflicts and problems, yet you see how good they are for each other so you can’t help but root for them.<br></br>
Lisette’s kindness and lioness heart (especially when it comes to protecting the kids) is just what Charles needs. And Charles’s sometimes pushy yet heartfelt desire to show Lisette how to accept love and caring from someone else is exactly what she needs to trust again.<br></br>
This was a wonderful book to cap off the three brothers’ stories. Though I’d also love to see Tess’s HEA someday soon! (Hint hint)” —Priscilla Kissinger, Amazon/Goodreads review

“I have been a big fan of Jennifer Gracen from the first book of hers I read and has continued through The Harrisons series. I’ll admit I wasn’t all too sure how I would like this book because Charles Harrison III hasn’t really impressed me all that much in the first two books, although in the last book I did see him softening a little or maybe he just seemed a bit more human, but Ms. Gracen peeled back his layers and I found the man underneath to be charming, caring, and quite sexy (something I really didn’t expect) and the fact that this millionaire fell for his nanny was just too perfect for words. Sweet and sentimental with a helping heap of secretive sexy, I loved ‘Tis the Season!<br></br>
In previous books of this series, we know that Charles Harrison III is slated to take over Harrison Enterprises although in reality he is already running it as COO. We know Charles is a divorced, single dad to three fairly young children, is close to one brother and his sister and has been mending fences with his other brother since he returned to the family fold the previous year. We also know he is a workaholic. This book opens at the party for his 40th birthday where he begins to do some pretty deep soul searching and I have to admit, I admired him for taking stock of his life, for realizing the mistakes he was making and for deciding to change things for him and his children.<br></br>
For the past two years Lisette Gardner has taken care of the Harrison children and gives them the stability, care, and love they need and crave. According to her employer and his siblings as well as the house staff she has managed to tame the out of control children and the children not only respect her but love her. Lisette admits that she is attracted and even has feelings for her boss, but she will never risk her security, her home and her job so she buries it and does her job.<br></br>
I’d like to say Charles woke up one morning and noticed Lisette across the table and fell madly in love with her, but it didn’t quite go down that way. I enjoyed the way their relationship began and felt that all the doubts and confusion was spot on especially given the fact that they are employer and employee. While at times I felt the Lisette’s worries were a bit overboard, the way Charles tried to discount them was a bit worrisome as well. I loved that Charles’ siblings had their backs and even helped Charles to understand Lisette’s issues. Most of all the fact that both Charles and Lisette felt they could share their fears, their concerns, and everything they were feeling showed the trust they had built and their strong bond. One thing they were both very adamant about was that despite their relationship and no matter what happened between them that Lisette would continue on as the children’s nanny because for both of them the children had to come first, just the way they should.<br></br>
There were a lot of ups and downs in their relationship; Lisette’s continued worry, Charles’ work situation, an unwelcome surprise visit, and family issues all of which put stress on their burgeoning relationship. I have to say that Charles stepped up to the plate on more than one occasion and even took some advice from a very unlikely source.<br></br>
‘Tis the Season was a jam packed story filled with emotion, laughter, a bit of craziness but most of all a lot of love and I absolutely adored this book from beginning to end.” —D, Guilty Pleasures Book Reviews blog