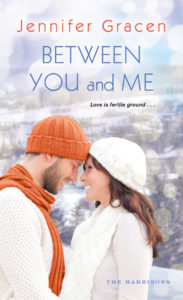 Between You and Me (The Harrisons Series #4)

As the only daughter of the wealthy Harrison clan, Tess Harrison has everything—except the baby she longs for. With no husband in sight, she escapes to her family’s retreat in Aspen, Colorado, visions of sperm donors dancing in her head. Instead, she finds Logan Carter. When the ruggedly handsome manager of the Harrison ski house offers to be her baby daddy in exchange for her playing his girlfriend, Tess is breathless to begin the charade. After all, the brokenhearted heiress knows better than to fall in love . . .

She would be Logan’s dream girl, if his dark past had left him with any dreams. Now the brooding bachelor’s only hope is to satisfy his mother’s dying wish to see him happily paired off—and give lovely Tess the baby she longs for.  But when he and Tess opt to make a baby the old-fashioned way, he’s fighting hard against the longing to hold on to the elusive Harrison beauty forever . . .

“Gracen gets better with every book, and with her fourth Harrison siblings contemporary (after Happily Ever After), she hits the emotional jackpot with a multilayered tale of a rich yet down-to-earth woman and an intelligent, caring man who can’t forgive himself for past mistakes. At a joyful Harrison Christmas celebration, Tess Harrison feels alone—her brothers are all married and have children, and she’s still single. She decides to have a baby on her own, heading to the family’s house in Aspen, Colo., to dodge unwanted questions. Meanwhile, after a disastrous divorce in New Orleans, Logan Carter goes home to Aspen, planning to take care of his dying mother and work as a house caretaker—one whose duties involve the Harrison house. Logan is honorable and generous, and he still blames himself for not saving more people during Hurricane Katrina. He’s got combustible chemistry with Tess but refuses to let himself fall for her. When Tess asks him to be her sperm donor, Logan is floored, and it changes their relationship forever. Gracen’s lyrical prose, combined with heartbreakingly perfect characterization and a stellar cast of supporting players, makes this one a keeper.” —Publishers Weekly, STARRED REVIEW

“Gracen is once again exploring the dysfunctional relationships that plague the Harrison family. Tess Harrison has been thrilled to see that her brothers have found the loves of their lives, but sadly she, the only daughter, remains alone. One interesting element of this book is that Tess is really the only person in the family who has remained on reasonably good terms with their arrogant and dictatorial father. That has meant she has been the peacemaker and go-between for the family. Tess deciding to take time away for herself upsets and worries the rest of them. Gracen is definitely a star on the rise who consistently proves she has a talent for writing memorable contemporary romance!” —RT Book Reviews, 4 Stars

“One thing you can always be certain of when you pick up a book by Jennifer Gracen is that she will bring you a strong, independent, smart lady and that’s why her books always work well for me. Book four in The Harrisons series does just that, turning the spotlight on Tess—the girl amongst boys, the sister, confidante and cheerleader—and her HEA plan is a little less conventional.

…Logan and Tess may have had a bit of a shaky start, but as they take the leap from friends to lovers, they bring everything from humour to heartache. And although at times they were a little frustrating and some of their liaisons came with a clinical feel, even that aspect played its part amongst the passion and crescendoing feelings.

…With many of the smiles created along the way by Tess’ brothers (Charles still remains my #1), I devoured Between You and Me pretty much in one sitting. But the cherry on top of this friends-to lovers-treat was discovering that this isn’t the end of the series and with a sneaky peek of the opening chapter of the next book, I have a feeling it may be an emotional one. In the meantime, if you’re fancying an easygoing, sexy romance to warm you up this winter, then this hits the spot.” —Nicola 1202, Goodreads/Amazon review

“I’d recommend this story or series to any Romance reader who believes that love matters most no matter the circumstances. It’s just that simple. I enjoyed this one, and I believe you will, too.” — Marsha @ Keeper Bookshelf, Amazon/Goodreads review

“I was curious to see what author Jennifer Gracen had in store for the only female Harrison sibling; the ‘mother hen’ of the group, the one who tries to maintain the peace in the family, and the one who put everyone else and their needs before her own. I love that this story took place largely away from her brothers and overbearing father and gave readers a chance to really get to know her as she worked to make her dreams come true. From acquaintances, to friends, to lovers, to so much more, two people with very different outlooks on life find a love neither one expected in this alluring and captivating story.

…Given that the last time Tess was in Aspen she and Logan had a conversation that made her look a bit haughty and him putting her firmly in the “blue blood” category, it took a while for them to come to terms with that and move forward. I liked that he discovered otherwise organically, that as he observed her actions he began to realize she was a genuine person and he developed a healthy respect for her. I loved that Tess never once thought Logan was beneath her, that she enjoyed his company, recognized his intelligence, and was thankful for his friendship. The fact that she opened up so easily to him about why she was in Aspen was a testament of how much she trusted him and while it did take Logan a bit longer to open up about his past, once he did I think it not only helped him to unload, but made him realize that despite Tess’s upbringing she wasn’t a judgmental person. There were a lot of trials and tribulations to their relationship and while they made some mistakes, it was obvious that the respect and love between them never wavered.

I loved the depth of this story, that these were two people who have suffered hurt and thought they had their lives figured out and love struck them when they didn’t expect it. Their actions and reactions were spot on and the emotion that poured from them was believable. I like that they were in a strange and somewhat difficult situation, that it took some time for them to figure out how to make it work and most of all that despite everything they were there to support each other. Between You and Me was a masterful romance, expertly crafted, and one I won’t soon forget.” —Slick Reads, Guilty Pleasures Book Reviews blog

“4.5 ENTHUSIASTIC STARS! I’ve been waiting impatiently for Tess’s story (aka “Tesstastic”) since I first met her back in 2015 in MORE THAN YOU KNOW (The Harrisons #1), and met her again in SOMEONE LIKE YOU and ‘TIS THE SEASON (The Harrisons #2 and #3).

But… I saved BETWEEN YOU AND ME (The Harrisons #4) for a long drive to and from Phoenix, and what I knew would be a highly stressful day, specifically because I was confident Jennifer Gracen would take me away to the world she created. I wasn’t disappointed.

The hours slipped by as I eagerly turned the pages, and I hated having to put the book aside from time to time as I dealt with what I had to deal with. But as soon as I finished each task, I dove right back into the book.

There were a few laugh-out-loud moments, but it’s not a slapstick comedy. There were a few emotionally wrenching moments, but thankfully the book didn’t dwell on them and drag me into depression. BETWEEN YOU AND ME is filled with humor and heart—my favorite kind of romance.

The best thing about this book is its characters’ imperfections. These could be people I know, and I shared their joys and sorrows from the get go. The twists and turns the story took were enough so I was never confident what would happen next, and yet there was a warm and fuzzy overall feel, a likeability quotient that kept me hopeful. I needed an enjoyable escape, and in BETWEEN YOU AND ME Jennifer Gracen delivered in spades.” —Amelia Autin Lam, Amazon/Goodreads review

“Really, really good — that’s my take on Jennifer Gracen’s Between You and Me. I loved all the characters — the loving, albeit nosey, brothers and the spitfire mom (who is feisty and vocal in spite of her illness). But most of all, I really loved the hero and heroine! They’ve both been burned by love and have devised very different methods for coping and moving forward. While initially ignoring their physical attraction for one another, proximity and chemistry are tough foes to battle when you don’t really feel like fighting. Once they give in, they find in each other comfort, caring, passion, acceptance and ultimately love. What more can you ask for?

Regardless of the type of romance you usually prefer, this one is so good, I know you’ll love it.” —Synergy, Amazon/Goodreads review