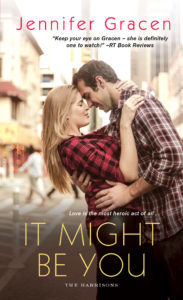 When Officer Nick Martell learns that a sick child needs his help, he flies to the young Harrison boy’s side. But once in the heart of the wealthy Harrison family, Nick faces a shocking truth—he is none other than a Harrison son himself, born of a secret affair. Though the blue-collar bachelor struggles to accept the elite clan as his own, compassion for the vulnerable boy compels him to stay. That, and the deep spark of connection he feels for the child’s beautiful nurse . . .

Amanda Kozlov never felt such a strong and sudden passion for a man before. But falling for Nick is not an option—the life the rugged cop leads is too dangerous, the wounds he carries from his explosive family history too fresh. Yet watching Nick bond with the young boy in her care, experiencing tenderness in his arms, Amanda longs to take a chance on the one man who could save the Harrison heir—the only man with the power to shatter her heart. And as drama swirls around them, only time will tell if they’re brave enough to give their love the future it deserves . . .

“Over the course of her series on the wealthy, powerful and truly dysfunctional Harrison family, Gracen has proven that she is a star on the rise! With this final chapter in the saga, Gracen reaches new heights by bringing in a secret-baby storyline that detonates like a bomb within the family. All the previous protagonists make appearances, some of whom do not react well initially. This terrific series has been about individuals finding love, but also about the building of strong family bonds where none existed before. This is one fantastic, emotional ride!”– RT Book Reviews, 4.5 Stars, Top Pick

“Gracen wraps up her Harrisons contemporary series with this heart-stealing fifth novel, cementing her reputation as a writer to watch… Gracen’s appealing tale makes it nearly impossible to say goodbye… Her hot yet sweet treat is headed for many a keeper shelf.”—Publishers Weekly, STARRED REVIEW

“This sweet story of two people bonding over a sick child will melt the most jaded of hearts.” – Kirkus Reviews

“The Harrison family saga, including Between You and Me (2017), comes to a close in Gracen’s fantastic finale. Nick Martell has a great family and a burgeoning career in the Miami Police Department. He’s eager to help a young boy in dire need of a bone-marrow transplant, but when he tells his mom Myles is part of the Harrison family, she faints. Nick then discovers that his biological dad, who was previously thought to be some nobody, is none other than the Harrison patriarch. Struggling to understand his new family of half siblings, all of whom are insanely wealthy, he finds respite with Amanda, the nurse tending to Myles. Their connection is electric, but they keep things casual, given all the drama surrounding both of their lives. But how low-key can they remain when they’re truly falling in love? Gracen closes out the Harrison series with a bang. Readers will want to read the entire series, but those who start with this one won’t be lost since Nick’s experiences with the Harrisons subtly usher readers into their world.” —BOOKLIST