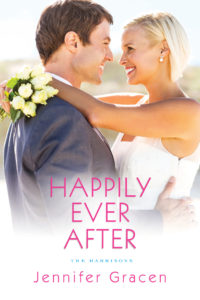 Happily Ever After (The Harrisons Series #3.5)

The wildest of the elite Harrison men is about to tie the knot—if the family drama doesn’t tie him in knots first . . .

The prodigal son of the wealthy Harrison family, Pierce Harrison’s wedding to lovely schoolteacher Abby McCord promises to be extraordinary—from the lavish Hamptons resort where the family gathers in anticipation, to the breathtaking ocean views where the couple will say their long-awaited vows. Conspicuously absent are the groom’s estranged parents—who nonetheless seem poised to do their best to destroy Pierce and Abby’s big day . . .

Pierce’s siblings, Tess, Charles and Dane have pulled together to protect their beloved brother from their meddling parents. But it seems Pierce’s wounds run deep—so deep he begins to wonder if the powerful love he feels for his bride is enough. Or if it’s even possible for someone like him to have—and keep—the kind of happiness that’s meant to last a lifetime. Will he realize that he’s the only one standing in his way, before it’s too late? . . .

“Gracen gets better with every book, and with her fourth Harrison siblings contemporary (after Happily Ever After), she hits the emotional jackpot with a multilayered tale of a rich yet down-to-earth woman and an intelligent, caring man who can’t forgive himself for past mistakes. At a joyful Harrison Christmas celebration, Tess Harrison feels alone—her brothers are all married and have children, and she’s still single. She decides to have a baby on her own, heading to the family’s house in Aspen, Colo., to dodge unwanted questions. Meanwhile, after a disastrous divorce in New Orleans, Logan Carter goes home to Aspen, planning to take care of his dying mother and work as a house caretaker—one whose duties involve the Harrison house. Logan is honorable and generous, and he still blames himself for not saving more people during Hurricane Katrina. He’s got combustible chemistry with Tess but refuses to let himself fall for her. When Tess asks him to be her sperm donor, Logan is floored, and it changes their relationship forever. Gracen’s lyrical prose, combined with heartbreakingly perfect characterization and a stellar cast of supporting players, makes this one a keeper.” — Publishers Weekly, starred review